Two Menus, One Exhibition No Degrees of Separation 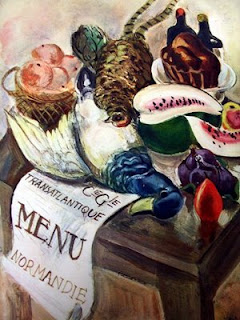 Diane and I ducked into the National Gallery to see current exhibition Art Deco.
We have for many years both been keen Decophiles and in fact it was an interest in Art Deco that originally brought us together nearly thirty years ago.
The exhibition shows footage of one of the most decadent examples of this extraordinary period; the super liner Normandie.
This was the epitome of modernist French extravagance.
When we got home I started to look through an old box of menus remembering that many years ago I found an original menu from the Normandie in a junk shop in Geelong.
I decided to dig it out to see what was being served upon those Limoges plates and Lalique glasses in the magnificent dining room.
The said menu, pictured, is from 18 September 1937 the cover is strangely conservative with just a restrained hint of stylisation in the inside typography. Not very deco at all. It must have seemed quite conservative in the modernist interiors of that floating palace.
Caviar, Consommé, Turbotine Dieppoise, Caneton a l’Orange, Terrine de Foie Perigourdine the usual suspects of the time.
.. 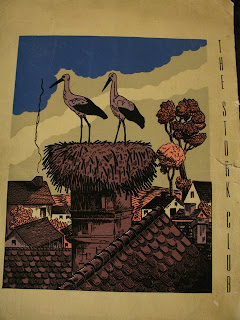 While I had the box of menus out I got distracted by another deco menu, this time from the
Stork Club in New York [I can’t remember where I found this].
This menu has two sections. The first: an extraordinarily long full a la carte menu of about 14 courses with choices galore.
This menu dates from 1943 in the middle of the war a time of rationing and austerity yet there is Lobster, Green Turtle, Sweetbreads, Calves Liver, Guinea hen and the best of U.S. prime beef.
But the second half of the menu is what got my attention, it is a list of Chinese Suggestions with a list of rather Americanised Chinese dishes where chicken chow mein [sic] costs as much as Lobster Newburg: what gives? Simple the place had goodfella connections.
But where is the relationship between the two menus and the exhibition you ask?
Well; the footage straight after the stuff on the Normandie is of Josephine Baker and the name on the top of the Stork Club menu is Managing Director Sherman Billingsley.
Josephine Baker came to New York on the Normandie and later when she visited the Stork Club, Sherman in his wisdom decided to deny her service as she was black. Bad move: the resultant publicity was to destroy the club. Not even Walter Winchell who has a hamburger named after him on the main menu could save Sherman and the club.

Now back to the real world and what to put on this weeks menu.
Will it be Broiled Sweetbreads Virginia? Asperges Froid Sauce Argenteuille? or Hung Yan dai ding?
Excuse me I have to start to polish the Puiforcat.
Posted by George Biron at 22:05

Mr S and I spent hours in that exhibition - a shared passion for us too.

As someone who studied design, amongst other things, I found it an eclectic approach including items that aesthetes would have considered belonged to other movements. But I didn't care. I loved it anyway - and the revolving doors....ooh....aah!

Paris in that time would have been jaw dropping. Oh to have gone to see racy Josephine Baker on stage and carousing at parties!

In terms of snobbery I expect some have not moved on. The thought of showcasing her may have been as abhorrent then to some perhaps, as entertaining Tupac and other Gangsta Rappers may have been more recently?

Sticky
re Baker,
Shades of the Catani incident.

Ah yes, I had forgotten about that. It just goes to show that people still vote with their feet. The place has never again drawn crowds even under new ownership.

As much as we love St.Kilda, Mr Sticky were just reminiscing sentimentally about the old days - as we knew it - when we witnessed a great melting pot of ideas, races and bohemian ideals.