The Last Summer at Chris’s in Lorne 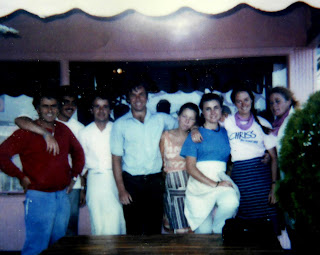 The Last Summer at Chris’s in Lorne
I was a late comer to Chris’s.  This little unpretentious 40 seat café had already made its name for decades as the place to be in Lorne for honest simple grills and sensational seafood. Chris would start the day early at the pier bagging the best seafood of the day, big sacks of crayfish, tubs of proper calamari. Gemfish was the most popular fish du jour. He would make Kakavia the Greek fisherman’s soup, pure pistachio Baklava and a mess of chocolate mousse before finalising all the orders and preparing breakfast for his elderly parents who came from Greece for the southern summer. By the time I started my day around 3pm Chris had already ensconced himself at the sidewalk table spruiking the day to the passing parade of regulars booking tables and running to and fro to the TAB for the day’s bets. Stevie, Sammy and all the other Greek old boys who ran the café scene in Lorne would gently break each others balls over coffee and gossip. Kosta, Chris’s younger brother would often call in to “borrow” a few cray and take the parents up the road to his café to see the grandchildren.
This summer was different the pressure was on from the big developers. David Mariner was hovering he had to get Christos to sell up to realise his big fuck off development A serious charm offensive. Eventually he made an offer too good to refuse and the countdown was on.
The staff were a motley crew of local grommets, super smart university students and a few experienced hospitality tragics.  Many lived or camped out the back of the shop.
It was a small restaurant with a small kitchen that did seriously big numbers.
A big thick flat grill ruled as the kitchen piano.  Chris had a remarkably simple system of service that echoed how Chinese restaurants worked. One of the young Einsteins would receive the orders and get the raw produce from the fridge, a bowl of scallops, a couple of steaks, a clutch of calamari etc while verballing the whole service to the 2 cooks on the grill and stove. Aboyeur and Garde Manger in one.  Crays were dispatched to order before going on the grill or under the salamander with a swift cut through the head down the centre for a quick death.
The caller had to have the skills of an air traffic controller and the patience of a saint to talk through the often 3 sittings that would smash us on the grill every night in the season. The seafood was simply seasoned with garlic oil salt and pepper. Broiled on the flat top and served. The crays were the same or finished with a brandy sauce made a la minute for each one. There was a real Greek salad with the finest Fetta and good herbs and the famous roast potato. It took me a while to fully understand the lore of the potato. It was always Christos who put it on very carefully around 4pm in a big galvanised crate filled with about 80 big unpeeled but washed dry spuds not sure of the variety but they were not Kennebecs. There was a second tray for the 9pm sitting By 6pm they were baked potatoes, by 7.30 they had a crisp crust and by 9.30 they were nearly hollow with a crunchy skin and a smoky layer of silken spud. One weekday night just after I started the delightful Bob Cowcher was due late.  Chris kept us there to wait for his friend with a special bottle. I was worried that I only had about 3 potatoes left and they were rapidly shrinking. As I was leaving I said Hi to bob and apologised for the spud and I can still visualise his smiling response “George I was dreaming about that potato all the way from New York.” That’s what I call a signature dish.
Service began around 5.30 with families coming straight off the beach slowly building up to the first official service around 7pm these diners were well trained to be out by 9pm.
There was a doorman with a job of responsibility who herded the walkins armed with a roll of $5 notes from Chris that he would convince parents to give to their teenage children to go and get fish and chips or play the pinnies while the oldies could relax over a bottle, a cray or a big fillet steak. There were 3 normal sidewalk tables but often the footpath would be full of tables of diners right up past the old post office full of happy campers 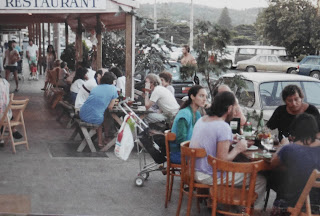 The heat in the kitchen would come to a screaming crescendo around 8pm to make sure the 9pm setting was ready to roll.
Chris had a very clever pressure valve installed in the shape of a punching bag hung in the corridor out the back that he, and all of us including the diners, would occasionally consult when the merde frapped le ventilateur. 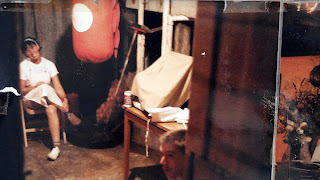 If we were lucky we could catch our breath before the nine o’clock rush.
This was the main course. After 9pm the real regulars would descend on the dining room. Christos knew just where to seat this A list. 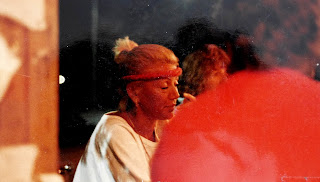 Joe and Patrice Saba had a table every night for at least 8 often a lot more that would spill into the rest of the room creating a soiree that continued well into the night. Pinder was buying the Burley Griffin Knitlok mansion. Rennie Ellis captured these scenes forever.
Chris worked the floor all night sampling the premier cru BYO’s and generously flirting with his adoring public. It was the toughest brigade I have worked with. Penny made sure everyone behaved themselves.
A summer of love tinged with sadness because of course the bulldozers would soon erase this sacred site. For what?
You can still find Christos Penny and Taki  [this is really a reminder to self to go soon] at Beacon point at Skenes Creek near Apollo Bay where the story continues.
Posted by George Biron at 10:05